So with the beast finally up and running, now to the job of the missing F# black key and sorting out the dreaded light pen.

Pulling apart the keyboard, which is an incredibly 'cute' MDF job by today's standards, I took out one of the existing black keys to take photos and measurements.

On to eBay I created fave searches for Fatar, light pen, Fairlight and any other related thing and watched for a few months to see if any useful parts came up...nothing except Stewart Copeland's actual Series IIX and Series 3's he used with The Police and films like Rumblefish, The Seventh Sign and TV series The Equalizer. 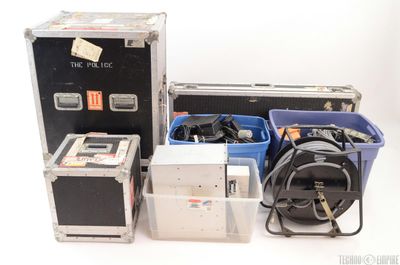 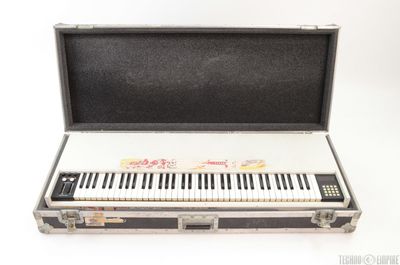 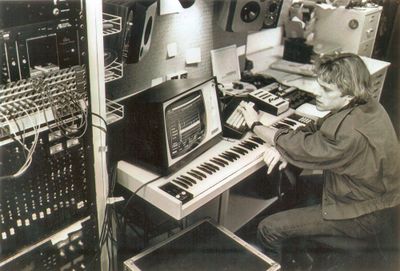 I read somewhere that Fatar had made the keyboards for Fairlight so I emailed the Italian keyboard maker directly and after several no replies I finally got a response saying they never made the keyboards and could not help. Hmm..I then took one of the keys into work to see if it's profile matched anything made by Roland. NO! Turns out every single key has a different profile. Amazing. Obviously there are many finger shapes and sizes but you'd think something like a music keyboard would be somewhat standardised?

With a bit of searching I found some spare parts companies around the world but none of them knew of the Fairlight keys so it seemed I was pretty stuck if I wanted the original key! 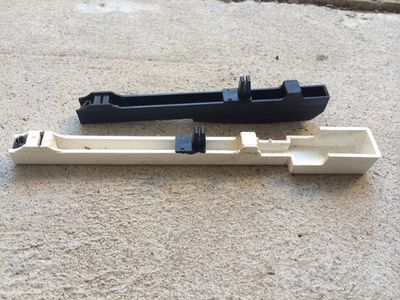 I had to face the fact I'd have to make my own key. A call to Roland Digital Group which is the 3D digital printer division, informed me that with their help, I could 3D scan and print a key but I'd have to wait a while to do it so I decided to push on.

First I tried tracing the key onto a lump of recycled plastic garden stake (clearly desperate) but half way through the tedious cutting process, the thing snapped in half so I decided to try again with a piece of Merbau. It's a really nice dark hardwood that I thought would be both nice to play and look at. 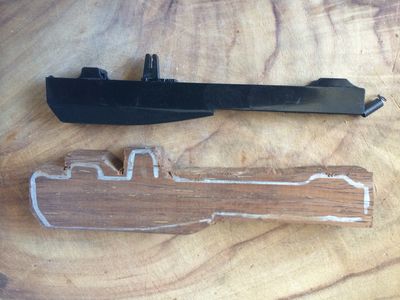 Again, I traced around the black key and proceeded to carve it roughly into shape. I then filed, sanded and shaped it to the same profile as the black key. I drilled and carved out holes for the springs and clip.  The original was hollow so I needed to follow this design in order to get it to fit which was a hassle but i got there with a combination of drilling and scraping away at it.

I was originally planning to paint the key but decided to leave it raw as it felt nice and gave the keyboard it's own personality. Also as it was F#, I knew this was the favourite musical key of Steve the owner so thought it would make a nice story. 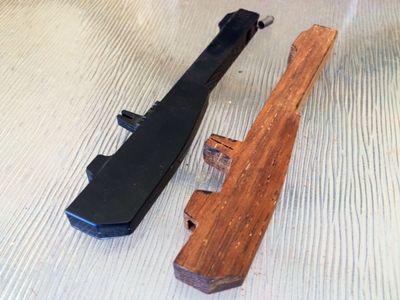 The original F# and a day later...the new Merbau F#

Re-assembling the keyboard was an adventure. The keyboard is a very crude design using a bar that is simply shorted out when the spring attached to the key touches it. This then changes the resistance of the signal sent to the processor card that registers the note. Almost every key had worn springs so I had to remove all the keys and shuffle them around to find the best compromise in action for the entire keyboard.

The spring and clip where missing altogether for a few keys so I used some black plastic to make some new clips and stretched, cut and bent some existing springs to make new ones. 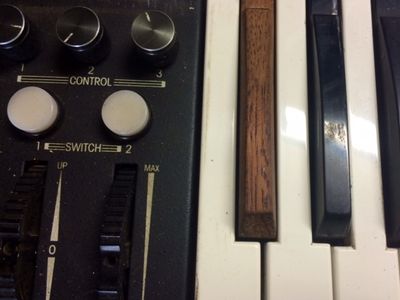 the F# key back in play

Onto the Lightpen. A great concept the lightpen. Problem was like a lot of concepts, It had it's issues and actually had a very short life. Compared to a mouse, holding a lightpen up at the right position is very tiring for the arm so when the mouse came along, the lighten was finished.

After all my searching I found very little information on the electronics apart from the basic concept of the function. Here's a simple diagram to explain how it works...

This circuit generates a pulse when the electron beam hits the pixels under the photodiode light detector in the tip of the pen. The electronics inside the graphics card display controller then determines the X and Y coordinates of the pen when the hit signal from the switch is triggered by touching the tip as it shorts out the signal at that position which fires the current command that's selected on screen.

To remove the plastic top that houses the tip of the pen, I carefully twisted it off using a pair of vice grips and a vice. Once apart, I checked for dry joints and re-soldered some of the rough joints. 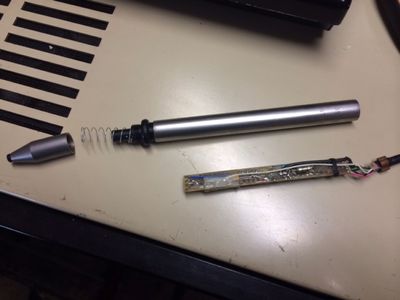 The female one i placed on the CRT screen and the male on the pen. Luckily, I found the pinout of the lightpen in the service notes which was verified by Peter Weilk too. Thanks Peter! 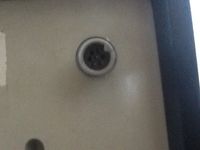 Now all connected, I still couldn't get any signal from the pen so some more tinkering and I found some bad connections on the circuit board of the pen and soldered those in. As the pen had obviously been repaired several times and there's so little space inside the pen case and force is required to push the tip back into the pen housing, it was a real drama to get it all back together with damaging it so I tried several times until I finally had it working successfully but wasn't sure how it's reliability would be over time. They were clearly designed to be replaced rather than repaired. 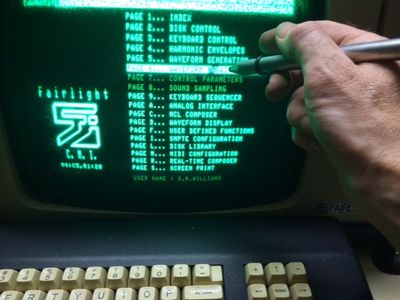 Selecting menu items via the lightpen

On the home stretch and with everything cleaned and tested, I loaded the old girl into the car for the 870klm trip to Melbourne.

It was a very exciting arrival.

After setting her all up, and with the turning of the starter key to which I'd attached a slither of the wood key profile as a little signature reminder of the work on the key, we sat back as it kicked into life. Loading some sounds and navigating our way around the operating system is really like stepping into a time machine. It's really incredible to me that any music was made at all with such a complex machine. After ten minutes or so it was clear that the lightpen was having issues... 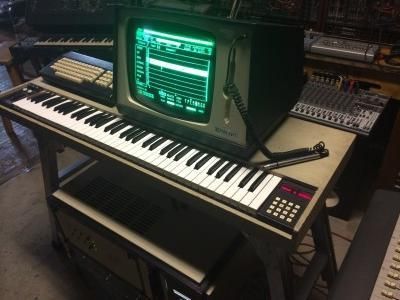 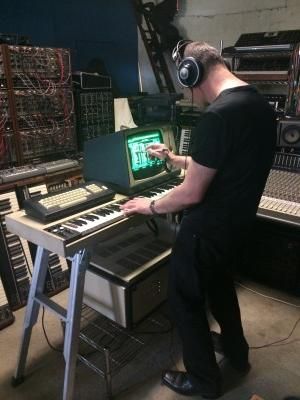 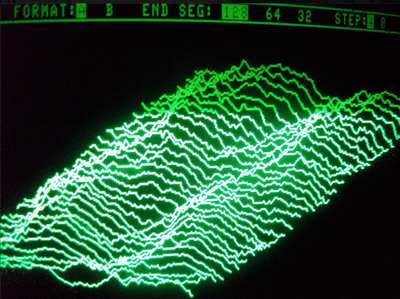 The revolutionary sample analysis screen in the Fairlight CMI IIX

I messed around for the next hour or so trying to repair it but decided to take it away again and see if I could tackle it in a new light back home. A bit disappointing after all the work but hey, it still works quite well with keyboard shortcuts.

So that's it for another restoration (almost...I'll tackle the pen later)... 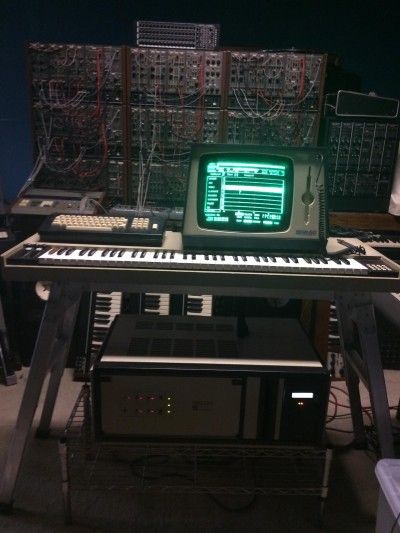 What can't a painting tresell do? 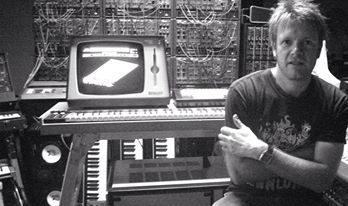 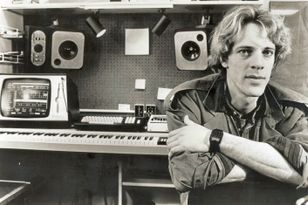 Remake of my hero Stewart Copland's famous, in the home studio photo...(Couldn't find my calculator watch though)